In my Marketing courses I regularly remind my students of this counter-intuitive truth:

In other words, people behave as if what they believe about the world is true, even in the face of evidence otherwise, and as long as those beliefs remain unchanged, behavior will too. Examples:

You get the idea; beliefs drive behavior, which brings us around to the whole idea of perspective, which we’ve talked about before. Since I’m currently looking at life from an African viewpoint, let me illustrate, featuring a place we expect to visit in a few weeks. Notice how a change in perspective changes, well, everything!

NOTE: this is not us in the picture, and all dialog is simulated.

Couple: “This is amazing! Africa is so incredible! How could it get any better than this?”

Couple: “NO WAY! A hippo! This is unbelievable.  It looks so life-like! I wonder if we can pet it…”

Couple: “Hmm. Okay, maybe we should not try to pet the hippo. I mean hippos. Let’s just steer slightly to the right here. They probably don’t want to be bothered. Sorry guys. Or ladies. Or whatever. Wow, that was really cool. Paddle a little faster, please.”

Your perspective on hippos (and the behaviors that follow) depend on what you believe. If all you know about them comes from viral videos of Fiona (below), you will see them one way. Awwwwwwwww……

On the other hand, if your perspective is based on pictures like this: 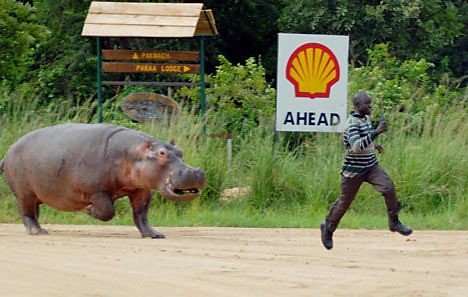 …you will understand that these “friendly animals” are territorial and unpredictable, can outrun and out-swim a human, and are considered the deadliest mammals in Africa, you will give them a wide berth, which is probably a much better choice. But as always, you will behave as if your beliefs are facts, so hopefully you have the full story. Your perspective determines your behaviors. By the way, we have a healthy dose of respect for hippos, a perspective which involves giving them a wide berth.

So what kind of perspectives leads to happiness? Here are three that can help:

Hopefully we will see some hippos next month. Hopefully from a safe distance. And from a nice safe perspective. I’ll try to snap a photo or two for you as Laura is frantically paddling.

Every so often I get to go run in some place more scenic than north Abilene, which is most of the world. Along a trail last weekend I came across this strange sculpture:

At first glance it looks like a plane crash in progress, or perhaps something alien from Star Trek. But that little colored tower off to the left is the key to seeing it “right,” or with the proper perspective. If you head around there and gaze up through a set of rings, this image emerges from the chaos:

Exact same situation, much better perspective. I suspect there are situations in myself that look and feel like a plane crash or a train wreck to me, largely because I am not willing to adjust how I see them, and whenever that is the case, I have nobody to blame but myself. The older I get, the more I come to believe in the power of changing my world by changing my perspective.

Here is one of my favorite posts on perspective, and how yours can change the world you live in.

Here is a link to Laura’s post which includes our full itinerary.

LAURA AND I HAVE A NEW BLOG HOME: VISIT MarkAndLauraPhillips.com to follow our African journey!